During a short visit to the MA Sculpture Department of the Bucharest National Art University, I observed a small gypsum plaster sculpture on one of the studio walls: a bizarre byzantine combination between a foot and a hand. I immediately asked who made it; and this powerful sculpture, as well as its creators unusual name (in English Rața means duck) remained fixed in my memory. It was impossible not to notice his artwork.

In the following years Rața sculpted and reassembled different body parts with a surgeon’s precision: hands became heads, a foot became a head, and fingers replaced toes. Rața completed the artificial reassembling of body parts with bold colours, creating new human hybrids in his very personal sculptural way. In 2011, when we decided to work together for the art in public space programme Proiect 1990, Rața had a clear vision for the plinth at the Free Press Square in Bucharest: “HandGun is a metaphor for human aggression and its symbol is the New Man; the individual has become a weapon. My sculpture was created to induce the idea of frustration and confirms the grim reality that we are all cannon fodder”. And, indeed, we all were: back during the communist era and even now as well. Rața decided to paint his 6m high ‘hand-foot’ sculpture bright red, a historical colour that used to define the communist party. The victory sign, a symbol of the 1989 Romanian Revolution, is transformed by Rața into a theatrical pistol gesture: Is the victory of the Revolution now lost? HandGun inhabited the Free Press Square plinth longer than any other sculpture from the project – seven months in total. Since November 2012, the sculpture can be seen on temporary display at the front entrance to the Bucharest National Museum of Contemporary Art, thanks to the efforts of the Museum’s Director Mihai Oroveanu (1946-2013). Now Handgun, the human cannon for the new man, is next to The People’s Palace- Ceaușescu’s biggest megalomaniacal dream; part of which now houses the National Museum of Contemporary Art; pointing out the errors of our post-revolutionary architecture. 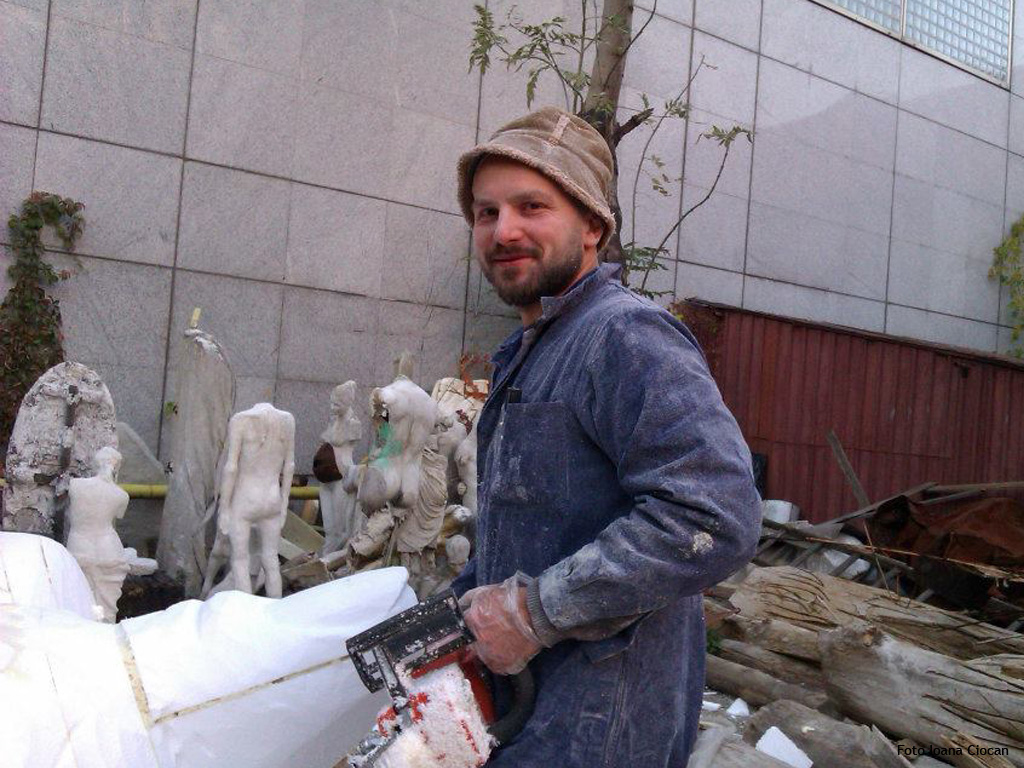 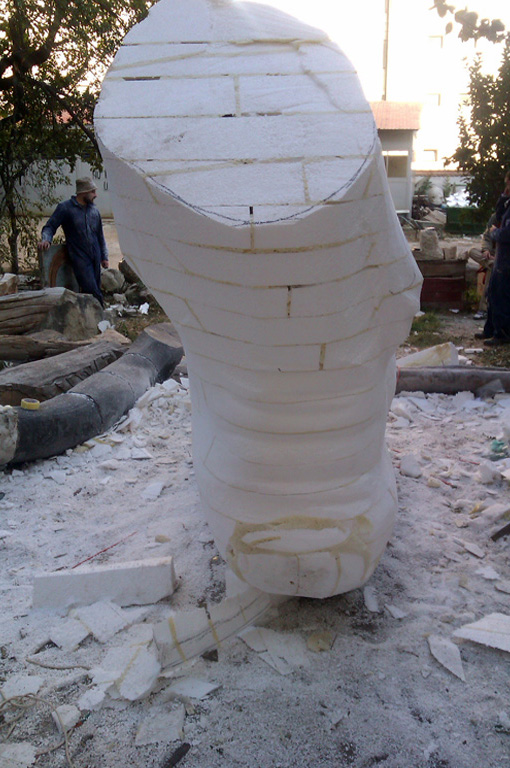 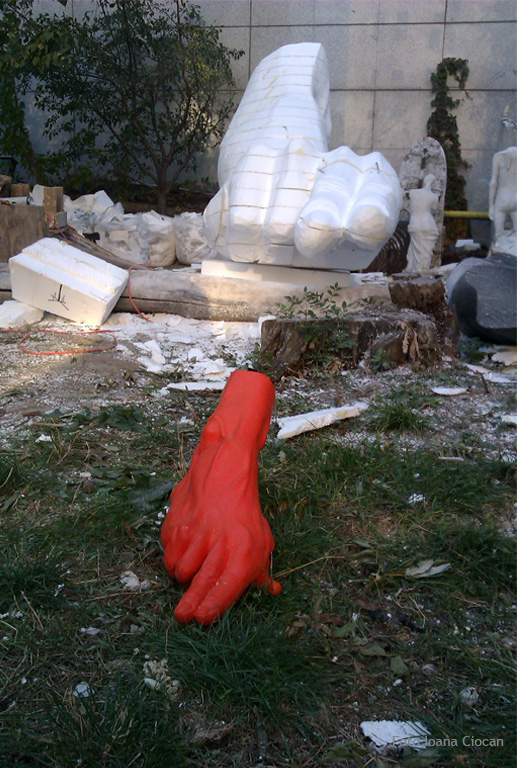 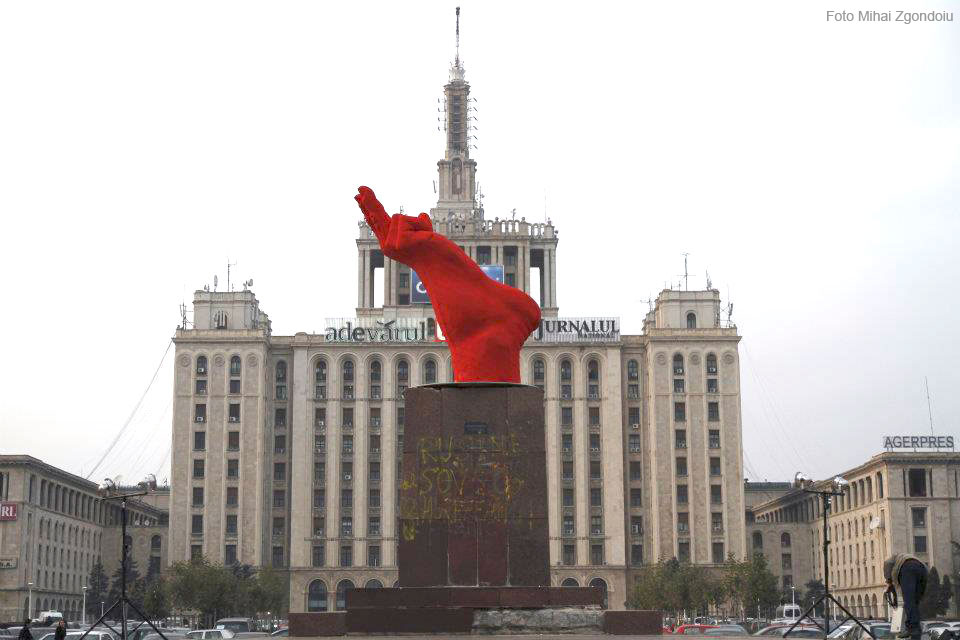 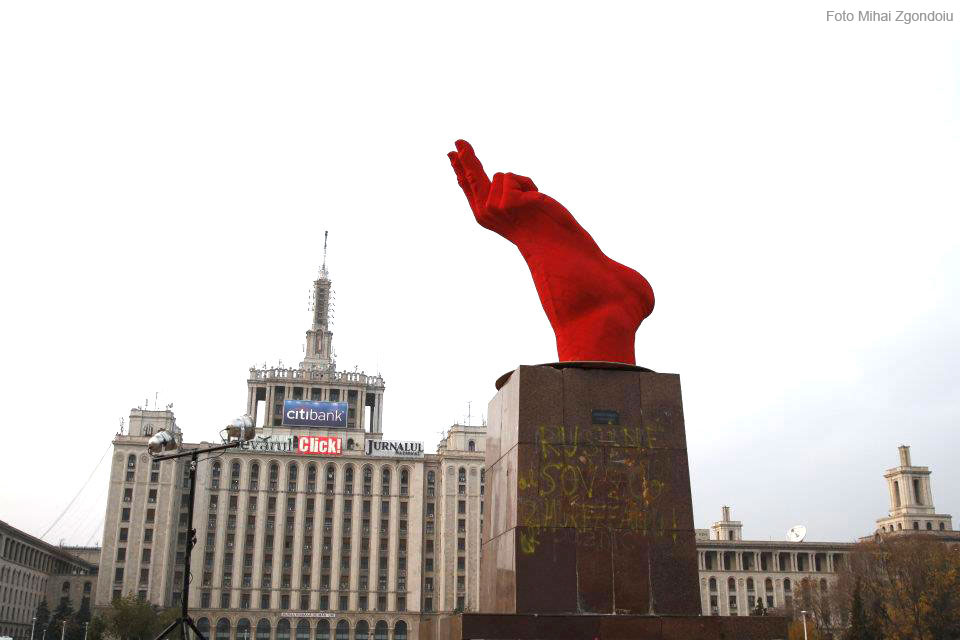 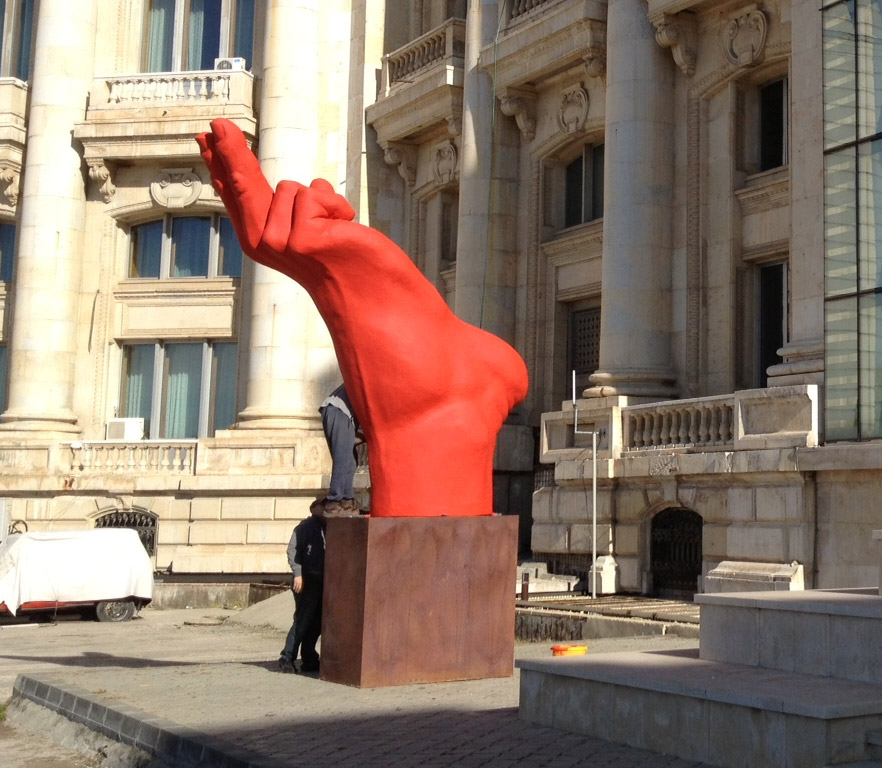 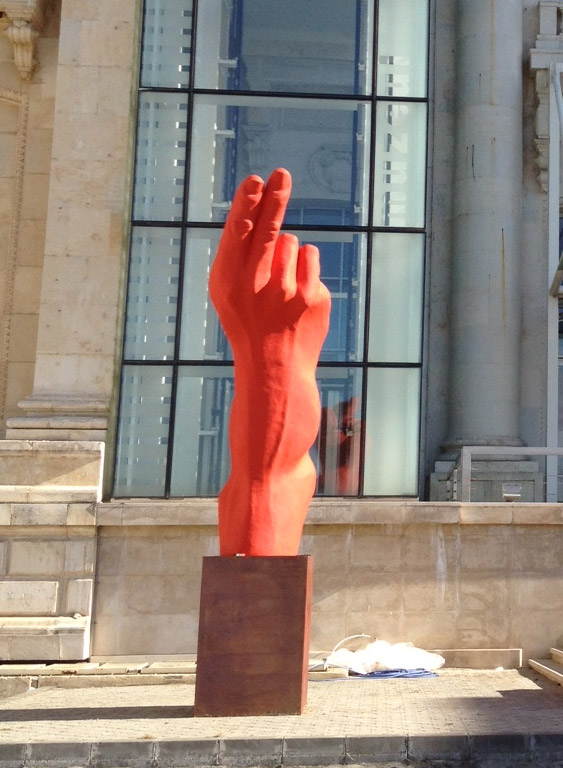 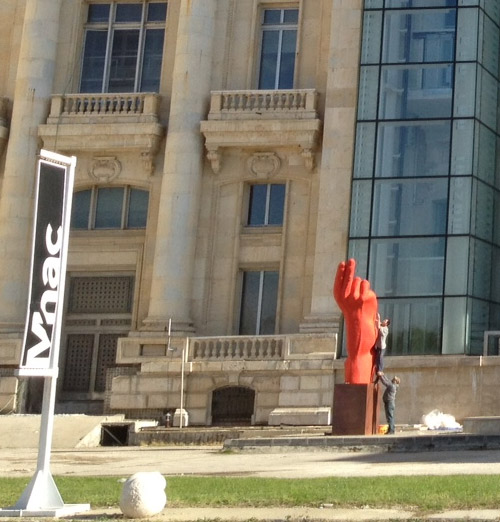 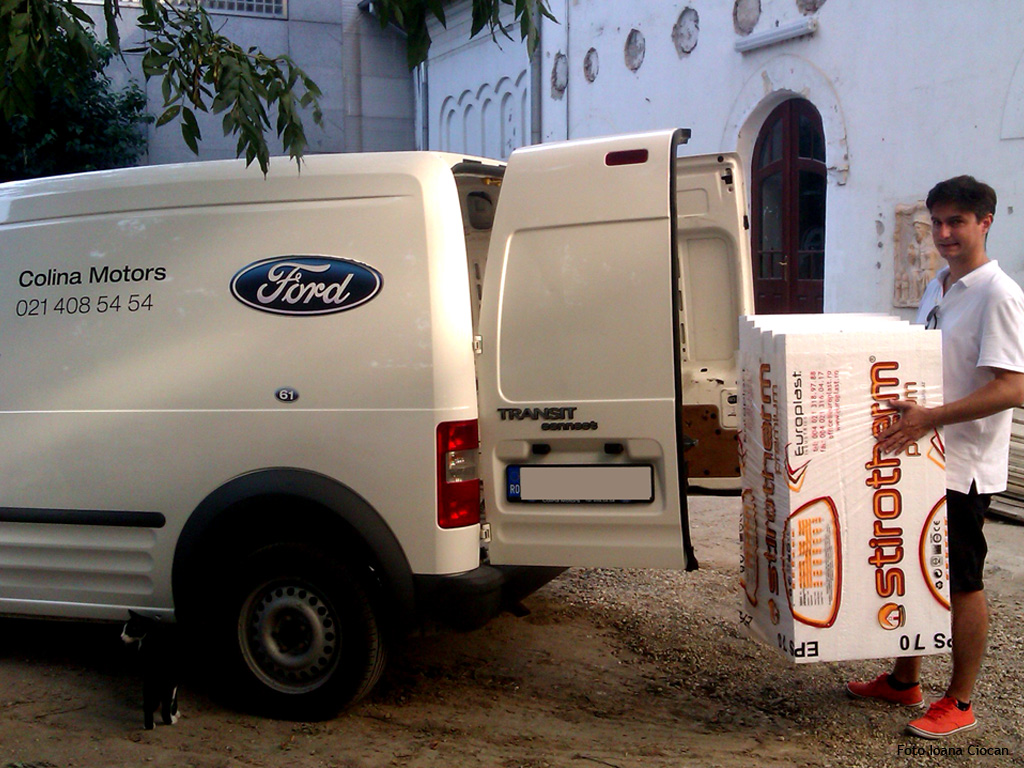 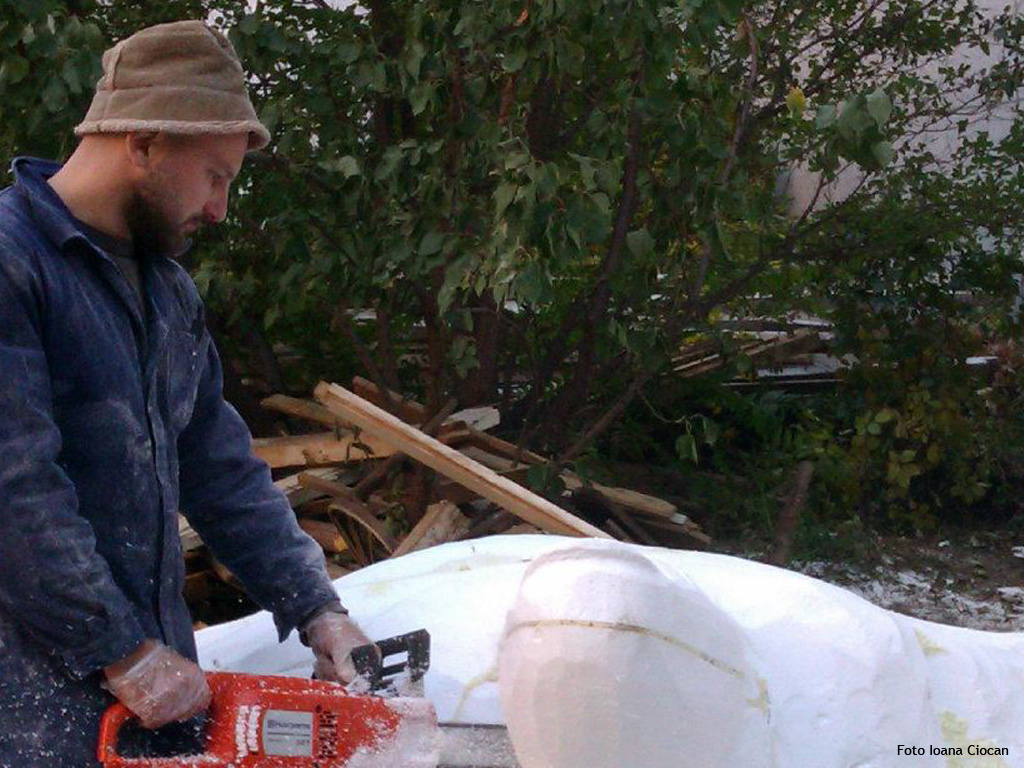